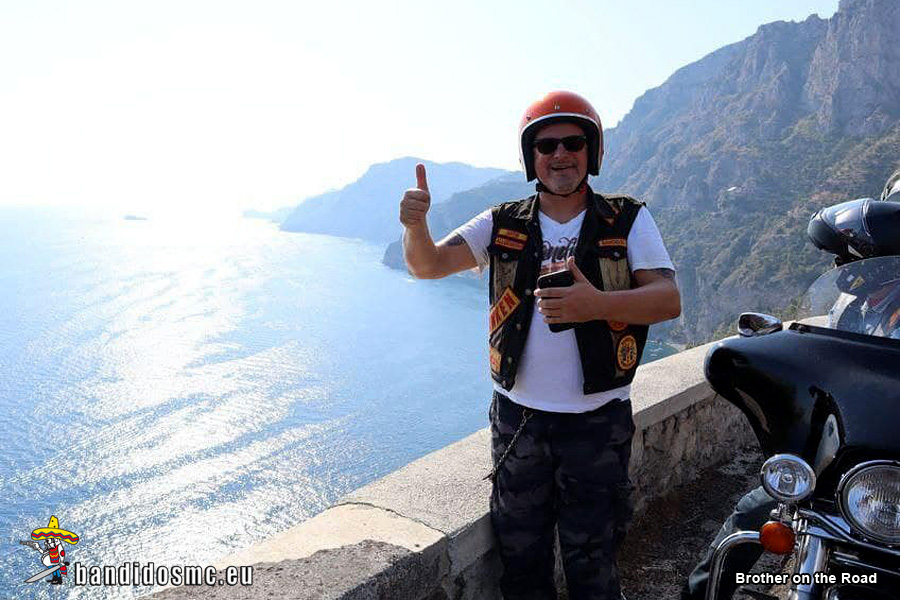 In last year´s early September, two Brothers from Bandidos Chapter Allersberg fired up their bikes for a long-planned road trip to Sicily. Via Passo di Stelvio and the beautiful Cinque Terre region, they first reached Massa Cararra with its worldwide well-known marble quarries. There they joined up with Bandido Antonio1%er SdA to

continue the journey further to the south. A short break in Siena would be noteworthy to mention just for the divine steak enjoyed there. In the best mood, the journey went onwards to lead to Naples, where the Brothers experienced a heartfelt welcome by Natalino1%er and his girlfriend.

No question, it was to take time for a sightseeing of the former Kings Castle and a tour through the ancient city. A delicious dinner completed another perfect day. Many thanks to Natalino 1%er and his charming girlfriend. After digging up Pompeii, the red-and-gold travellers were joined by Harry1%er and two other Bro ́s to commonly roll down the breathtaking Amalfi coast to finalize the day….how could it be otherwise: with another gorgeous supper. On the following day, the goal was Tropea, the Italian onion capital, as well to sample brilliant Italian food.

In pouring rain on the way to the ferry in Messina, Harry1%er had to leave the group without any regret riding in that good company. The Allersberg Brothers were also grateful to have him ride on their side quite some kilometres. The Bros then continued heading to the clubhouse in Catania as a dry place of warm Brotherhood. The Brothers there organized a dinner on the harbour, providing an unforgettable atmosphere.

As a highlight of that excursion, one of the main goals for the upcoming days a trip to the Aetna volcano was scheduled. Due to an earlier eruption, the group, together with the Raod Captain and one Prospect from Gladiatores MC had to challenge the 2.200 m altitude on the road fully covered with ashes. Despite all this, it was an awesome trip with adventure quality. At that point, the BMC company was just one hour off Antonio 1%ers hometown of Syracuse, where a beautiful hotel was waiting for them. In the impressive historic city of Syracuse as a cuisine highlight, the Brothers had the best ever pizza on the whole trip.

On the way back home once again, they had the chance to visit Angelo1%er and his girlfriend in Salerno. Accompanied by a relaxing and delightful BBQ it was a touching emotional farewell.

Two days later, after 400 km in terrible rain, the Brothers arrived in due time in Meran to participate at the Paul1%er Meran Memory Run. Words are not enough to express our thanks for a permanently perfect organised welcome our Brothers in Italy offering.

Finally, after a total of 4715 km without any trouble and bike breakdowns, the travellers arrived in Allersberg – for „Cordon Bleu mit Klas & Soß“ at Bombers restaurant. A special huge thank you goes out to SDA Antonio1%er for a perfect organisation & help on the trip. Every second we have been gifted with true Brotherhood.